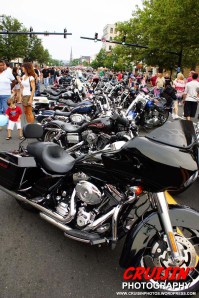 They jammed Main Street in Middletown, riders and spectators alike, on Wednesday, August 8th for the 7th Annual Motorcycle Mania.

“This was our best turn out ever. We had approximately 5,500 motorcycles and a crowd of about 15,000,” according to Cathy Duncan, Middlesex Chamber of Commerce Membership Director and the Event Coordinator. “We raised over $11,000.00 that will be used by the Middletown Mentor program, which is run out of the Chamber of Commerce, and Middletown Parks and Recreation. We had approximately 8,000 people in 2011, so we kind of out did ourselves. We’re wondering how we can top this next year.

Hondas to Harleys, BMWs to Buells and everything in between lined both sides of Main Street and straddled the centerline. The large turnout also spilled over to Dingwall Drive. “Main Street was totally filled. We have the widest Main Street in Connecticut. It’s 90 feet wide and unique, so it’s a great place for bike and car shows. We had the show bikes park on the upper end of lower Court Street.”

Motorcycle Mania is dedicated to the memory of Dan Hunter, part of the Hunter family that owns Hunter Ambulance and Hunter Limousines. “Dan died in a motorcycle accident in 2008. He had the right of way, but a car ran a red light in East Hartford,” Duncan explained. “Dan was one of the founding sponsors of the event. We put the idea of a bike night out there to the business community and asked who was interested. Dan was the first one to jump on board. This is the second year that Hunter Ambulance and Hunter Limousines are the title sponsor.”

Lori Waskowicz rode in on her 1999 Honda Shadow American Classic Edition. Jim Fabiani brought his 2006 Kawasaki Ninja from Terryville, while Karen French, of Guilford, arrived on her 2008 Harley Nightster. Monika Ahlers and Debi Killer made the trip from North Haven and proudly wore their colors to represent CT Women Looking for a Cure. Newtown’s Bob Stone, National Vice President of Captains for the Patriot Guard Riders, brought his Indian motorcycle as well as his friend Pattie Ptak, from Seymour. Tom and Ruth Law of Haddam Neck parked their 2007 Harley in front of Amato’s. Hamden’s Rich Mongillo Jr. arrived on his 2004 Harley Softail Deuce.

Motorcycle clubs were there en masse, including the Borinqueneers of greater Hartford, Old School Riders from Hartford and Longriders, who hail from Ludlow, MA. It was good to see La India and Solo Hernandez and Angel Cacique Luciano from New Britain’s Universal Riders. Tim Green was there with Jeremy Ouellette, who belongs to Connecticut’s Die Hard Riders.

Middlesex Chamber of Commerce President Larry McHugh took me on a walk down Main Street. He pointed out the throngs of people enjoying a beautiful summer evening, the live music from Rock Slide, of Durham, and the many wares of vendors like the Slipper Lady and the signature char pit roast beef sandwich from the Hair of the Dog Saloon. “This is amazing. We have an unbelievable number of bikes and thousands of people have filled Main Street and our restaurants.”

McHugh introduced me to Dennis Hunter, Donna Hunter, Diane Hunter-Kranich, Dana Hunter-Moyer and Dale Hunter and kindly posed for a photograph with them.

Kudos to Duncan, McHugh and Rich Greco, Chairman of the Planning Committee for Motorcycle Mania for staging a festive evening that celebrated motorcycles of all makes, Middletown and Dan Hunter.