Classics and hot rods mingle with muscle cars in the parking lot at Spada’s Café.

Click HERE for the full gallery of images from this event

Though Mother Nature was determined to put a damper on Cromwell’s Second Annual Memorial Day Car Show on Friday, May 30th, she graciously held the rain in check long enough for hundreds of visitors to pack the historic Main Street. They enjoyed the beauty of the classic vehicles, the offerings of the shops and restaurants and two special presentations made to World War II Navy veteran Sal Rosano. END_OF_DOCUMENT_TOKEN_TO_BE_REPLACED

Click HERE for the full gallery of images from this event

The Cromwell Downtown Merchants Association brought the Historic District on Main Street alive with the sights and sounds of the first annual Memorial Day Car Show held in conjunction with the town’s Memorial Day Parade, on a sultry Thursday, May 30th. Hundreds of people came to check out the local businesses, hot rods, muscle cars and classic cars and to thank and pay homage to the veterans who have served our country. END_OF_DOCUMENT_TOKEN_TO_BE_REPLACED 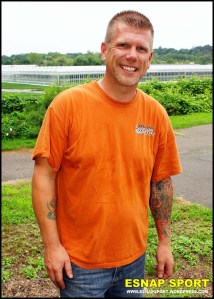 The Need For Speed
by Dave Burnham

“I have to race. It’s what I do. I’ve tried to get away from it but I can’t. It’s my disease!” local businessman Rodney Bitgood said as he showed me his fire-breathing 2,000hp Camaro dragster.

When he was young, Bitgood always dreamed of being a race car driver, but thought he would be going around in circles like his uncle who raced at Waterford and Plainville. When he was 14, Bitgood met his future Crew Chief Bill Scrivener of Scrivener Performance in Middletown.

A friend of Rodney’s brother, Scrivener raced a ’68 Camaro and a ’70 Nova that were both 10-second cars. “The first time I went to the track with Bill I was hooked,” said Bitgood. “I crewed on his car throughout high school and went to a tech school to learn mechanics.” END_OF_DOCUMENT_TOKEN_TO_BE_REPLACED